WARNING: If you are squeamish then look away now, this post contains feet.

So June has been a great month for magazine freebies =) this time I'm showing you a Leighton Denny polish I got free in Harper's Bazaar.

The shade is Coral Reef, a nice hot pink take on coral.

I will be honest and say that I'm not a huge fan of the man himself as from facebook and various networking sites he has come across as a bit of a pretentious prat, but that's just my opinion, still a freebie is a freebie.

This polish was a bit thicker than I like but went on ok.  I then decided to make my first attempt at Zebra stripes with an Orly black striper.  I think it went ok (though it did take me 2 attempts), then for a bit of sparkle whacked on a coat of L.A. Colors Star Light.

Apologies for the strange close up pics of my toes but I was trying to show of my striping. 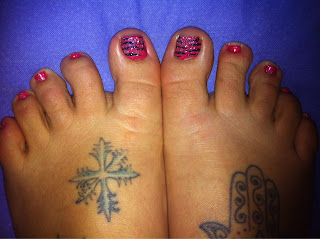 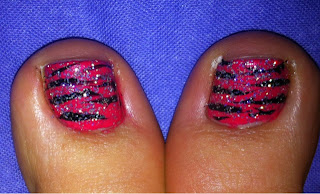 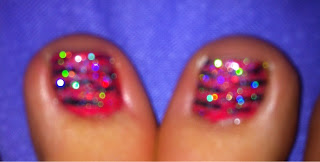